Byron Dorgan (D–ND) has proposed an amendment to the Senate’s healthcare bill that would legalize reimportation of prescription drugs from Canada.  No big surprise there: Dorgan’s a Democrat, after all. 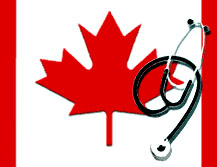 But drug reimportation has lots of Republican supporters too, including Olympia Snowe, David Vitter, Chuck Grassley, and John McCain.  Ezra Klein notes just how nonsensical this is:

The case for drug reimportation, as Vitter says, proceeds from the recognition that residents of other countries get much, much lower prices on drugs than Americans do. Many of these drugs were invented by American companies and produced in American factories. But Canada gets them at a discount. Why?

….In closing, Vitter urged the Senate to “take this step and do what we all say should be a top priority and actually lower health-care costs. I urge all my colleagues to come together and do this in a bipartisan way.” Boiled down to its essentials, Vitter just made a case for a bipartisan embrace of a single-payer system.

Drug reimportation is quite possibly the most ridiculous and hypocritical way conceivable to get lower pharmaceutical prices.  If you think the government should bargain down drug prices, then at least have the spine to say that the government should bargain down drug prices.  Don’t outsource the job to Canada’s government-run healthcare system, which, according to conservative conventional wisdom, is little better than an icy death factory that dooms its citizens to bad hips, painful cancer deaths, and endless waiting lines.

There are times when I feel that I’m pretty inured to political opportunism and duplicitousness.  But railing against any kind of government interference in the health industry as death panels and socialism, and then turning around and suggesting we take advantage of the benefits of an actual socialist healthcare system really takes the cake.