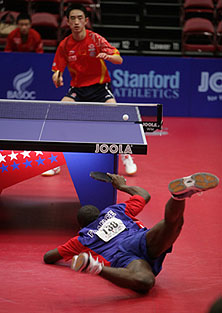 Should ping pong become the new liberal sport? That is, should the House just skip the conference committee on healthcare reform entirely and simply vote on the bill produced by the Senate?  This is, for some reason, known as ping-ponging, even though it doesn’t really involve any kind of back and forth.  In fact, the whole point is to eliminate the back and forth. But whatever.  Is this a good idea?

I suppose institutional pride will prevent the House from agreeing to do this, but at this point I wonder just what they’re likely to gain from a conference report? On abortion, the Senate bill is already better less atrocious than the House bill, its mandate penalty is smaller, and its defined benefit packages are more flexible.

The House bill has several advantages of its own, but among the big ticket items the public option is DOA and the others (somewhat wider coverage and more generous Medicaid expansion) would increase the price of the bill and are pretty clearly unacceptable to the centrist bloc in the Senate.  That leaves the funding mechanisms: an excise tax on high-cost healthcare plans and a higher payroll tax on the wealthy in the Senate bill vs. higher income taxes on the wealthy in the House bill.

The excise tax has a sound policy justification, but a big chunk of the liberal constituency dislikes it anyway and I could certainly see a compromise here: raise the limit on the excise tax so it hits only the very richest plans and then combine it with a smaller income tax hike.  Maybe that’s worth going to conference for.  But it’s hard to see any other substantial improvements that are likely to come out of it.

So: go to conference and risk another month of squabbling and possible defections?  Or take the imperfect Senate bill and get it passed for certain within a few days of returning from recess? Seems like a close call to me, but ping ponging doesn’t look like a bad option at this point.

UPDATE: More here on some of the procedural issues.  Turns out that ping pong might be more likely than we think thanks to yet more Republican obstruction.

UPDATE: 2: Austin Frakt points out another drawback of avoiding a conference committee: there would be no chance to fix the Senate’s terrible “free rider” employer mandate.