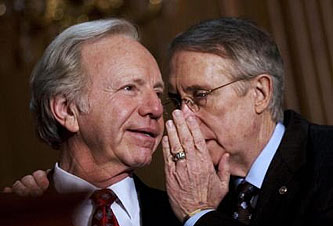 “Joe Lieberman is the least of Harry Reid’s problems. I don’t have anyone that I’ve worked harder with, have more respect for, in the Senate than Joe Lieberman. As you know, he’s my friend….Sen. Lieberman will let us get on the bill, and he’ll be involved in the amendment process.”

Reid’s staff has told anxious liberals that Lieberman has given the Democratic leader assurances that he will not wreck the reform bill because of Reid’s decision to include the public option, according to two sources briefed on the issue.

Sen. Joe Lieberman (I-CT) […] just gave his Democratic colleagues some breathing room. Lieberman said he’s open to both the Medicare buy-in idea, and a separate proposal to extend the private system that insures federal employees to individuals and small businesses.

Senator Joseph Lieberman (I-Conn.) informed Senate Majority Leader Harry Reid (D-Nev.) in a face-to-face meeting on Sunday that he will vote against a health care bill that includes a public option or a provision that would expand Medicare, a Democratic Senate aide tells the Huffington Post.

I wonder how Reid’s lifelong friendship with Lieberman is faring tonight?