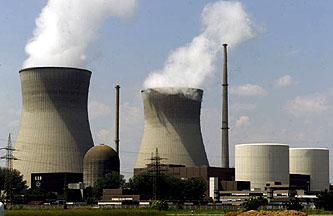 I’ve long wondered just why conservatives are so obsessed with nuclear power.  If nukes had the potential to do away with our climate change problem entirely, then I could see it.  Hooray, no new regulations!  But even cheerleaders for nuclear power don’t suggest that it could produce more than a small fraction of our electricity in the next 20 or 30 years.  So why has it become such a hobbyhorse?

Brad Plumer investigates today and basically says he’s not sure either.  But it seems to boil down to yet another culture war issue: since hippy lefty types are against ’em, all right-thinking patriots are apparently for ’em.  Dreary stuff.  But it is what it is, and if it might serve as the basis for a bipartisan compromise on a climate change bill, maybe it’s worth playing along.  But will it?  Here’s Brad with the bottom line:

There’s little point in acceding to the GOP’s nuclear demands without getting anything in return. [Lamar] Alexander, for one, recently admitted that, even though he’s taking part in talks over new nuclear provisions, nothing will persuade him to support a cap on carbon — which is the crux of any climate bill. “That’s something to watch out for,” grumbles one observer. “Is [the Nuclear Energy Institute] actually going to work to bring new votes to the table?” Perhaps it’s finally time to see just how much this love affair is worth.

I have a guess about that, but I’ll keep quiet about it for now.  There’s no need for puerile cynicism while more optimistic negotiators are still taking a crack at getting a nonnegative answer, after all.  There’ll be plenty of time for that later.