A front-page article in the Washington Post today tells us that a nonpartisan analysis from the Centers for Medicare and Medicaid Services concludes that the House healthcare bill would “sharply reduce benefits for some senior citizens and could jeopardize access to care for millions of others.”  It’s worth noting that this rather melodramatic statement is based primarily on a single paragraph in the 31-page report.  Here it is:

H.R. 3962 would introduce permanent annual productivity adjustments to price updates for institutional providers (such as acute care hospitals, skilled nursing facilities, and home health agencies), using a 10-year moving average of economy-wide productivity gains.  While such payment update reductions would provide a strong incentive for institutional providers to maximize efficiency, it is doubtful that many could improve their own productivity to the degree achieved by the economy at large….Thus, providers for whom Medicare constitutes a substantive portion of their business could find it difficult to remain profitable and might end their participation in the program (possibly jeopardizing access to care for beneficiaries).  While this policy could be monitored over time to avoid such an outcome, so doing would likely result in significantly smaller actual savings than shown here for these provisions.

What CMS is saying is that the healthcare sector tends to be labor intensive, and thus won’t be able to improve its efficiency as rapidly as the broader economy.  Which might be true.

Still, it’s worth noting that this is basically a counsel of despair.  It suggests that controlling the growth of healthcare spending is hopeless, and any attempt to try it won’t work.  We’re just going to have to pay doctors and hospitals as much as they want

I don’t buy that.  It’s plain that eventually we’re going to have to control healthcare spending one way or another, and the sooner we give it a serious try the better.  Even if the productivity regs in the House bill don’t work, at least we’ll learn something along the way.  Maybe the Senate’s plan to tax high-cost health plans will work. 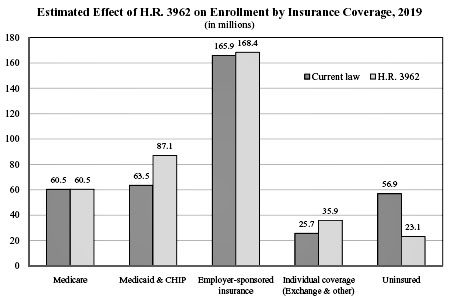 Maybe comparative effectiveness research.  Maybe delivery reforms.  Maybe figuring out why we pay 5x as much for an MRI as Japan does.  Maybe something else.  Who knows?  Eventually we might even get to the point where we can talk about serious cost-cutting measures without Republicans going into manufactured conniptions over death panels.  After all, it’s either that or national bankruptcy.

In a brief list of “caveats” at the end of the report, the CMS also worries that adding millions of new people to the healthcare system might cause problems if the supply of healthcare services doesn’t rise at the same time.  But other countries manage to cover their entire populations with overall utilization rates that are often higher than in the U.S.  I’ll bet we can do it too.  There will be hiccups along the way, but we’ll adjust to them.

And one more thing: despite the Post’s claim that the report says Medicare benefits would be “sharply” reduced and access jeopardized for “millions of others,” the report says no such thing.  In fact the report is quite careful to say that the market effects it talks about are speculative and impossible to quantify.  The effects on overall coverage, however, aren’t: lots and lots of people who otherwise wouldn’t have any coverage at all will get it.  The chart above tells the story.  More here from the Wonk Room