Andrew Sullivan on the prospect of trying the 9/11 suspects in civilian courts in New York City:

When you listen to the Fox News right speak about this, they reveal amazing levels of fear. They have been truly spooked by these men with long beards and chilling eyes. They are so scared of them they are willing to drop any 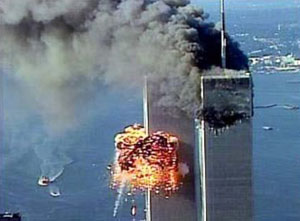 and all legal principles that the West has historically used with respect to mass murderers. Their fear brought them to institute torture, and to engage in mass brutality against prisoners of war in every theater of combat in a manner that will tragically taint the honor of the US military for a very long time. It led them to establish Gitmo, to create for the world a reverse symbol of the Statue of Liberty, and imprint it on the minds and in the consciences of an entire generation of human beings, whose view of America will never be the same.

It’s not as if the right’s reaction to these trials is a surprise, not after listening to a year’s worth of wailing about death panels, socialism, birthers, dithering, Chicago thugs, and more.  The right wing base today doesn’t just oppose Obama, they’re aboslutely terrified of everything he stands for.

But they brought the New York trials on themselves.  I’m not categorically opposed to using military tribunals in cases like this, but that’s hardly an option anymore thanks to the Bush administration’s contemptuous efforts to turn them into obvious kangaroo courts.  Hell, even military lawyers couldn’t stomach them.  As for an international court, that would be fine too except that conservatives have blocked every attempt to make the United States a party to them.  The only real choice left, if you want ensure something within shouting distance of a fair trial, is a civilian court.

But does this mean there’s any chance they could get off?  In theory, sure.  That’s the whole point of having a fair trial.  In practice, forget it.  The evidence against KSM and the others is too strong.  A year from now, they’ll all be convicted, New York City will be intact, and we’ll get on with our lives.

And the right will move on to being outraged and terrified about something else.