The folks at Law Enforcement Against Prohibition emailed this morning to highlight an amendment that Chuck Grassley is offering to a bill that would create a National Criminal Justice Commission.  Here’s the amendment:

The Commission shall have no authority to make findings….that involve, support, or otherwise discuss the decriminalization of any offense 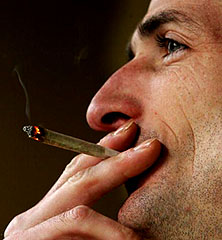 See?  If you want to make sure your experts don’t come to conclusions you dislike, just prohibit them from talking about those conclusions.  Then they don’t really exist.  That’s the American way of science.

And it’s becoming the British way of science too, at least when it comes to drug policy.  The Brits used to at least pretend to listen to their experts, but, as Mark Kleiman explains:

That has changed under the New Labour government, which has also taken a number of other steps to “Americanize” British governmental practice, for example by building up the power of the Prime Minister’s office vis-a-vis the ministries, in which the ministers are famously captives of their civil-service officials.  In some ways, this is a “democratizing” step, elevating the importance of the beliefs and values of elected politicians over those of unelected experts.  But that doesn’t mean that those of us in the business of being, and training, experts have to like it, and insofar as expert beliefs track objective reality more closely than do voters’ prejudices, it also means making decisions with a weaker connection to the actual phenomena.

When the head of the Advisory Committee on the Misuse of Drugs gave a careful, analytic lecture arguing that cannabis and LSD were over-controlled compared to more harmful drugs such as alcohol, the Home Secretary promptly sacked him on the grounds that for a scientific advisor to express an opinion touching policy made it impossible to have confidence in the adviser’s objectivity.   This is, not to put too fine a point on it, bullsh*t.  What the Home Secretary clearly means is that the Government is committed to the War on Drugs and isn’t interested in any advice that might get in the way.

More here on the British dustup.