From Sarah Palin, talking to Oprah about Levi Johnston:

By the way, I don’t know if we call him Levi — I hear he goes 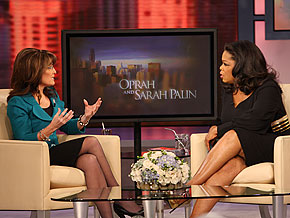 by the name Ricky Hollywood now, so, if that’s the case, we don’t want to mess up this gig he’s got going.

Ricky Hollywood? And this from a “former McCain campaign aide,” on Palin’s book:

It is unrecognizable at every instance. There is not one truthful account as it relates to any conversation I ever had with her.

So why is Sarah Palin so endlessly fascinating? The sex appeal that practically oozes out of every pore?  Her perpetual family soap opera? A sense of besiegement and resentment so powerful it practically knocks you over every time she speaks? The fact that she actually seems to take pride in her complete lack of policy expertise? Her seemingly total lack of real self-awareness?  The fact that she lies so casually it seems like she actually believes everything she makes up?

Yeah, I guess that’s it.  By the way, Sullivan has been watching her Oprah interview and says “She’s clearly hoping to run for president in 2012.”  Wouldn’t that be great?  And not just for the entertainment value, but to answer some truly nagging questions.  Is it possible to win the Republican nomination while giving interviews to no one except Fox News personalities?  Her fellow Republicans mostly treat her with cautious respect right now, but what will they say about her once they’re all on stage together during the primary debates?  Will she develop any actual policy positions?  And who would she choose to be her running mate?  Inquiring minds want to know.