A couple of days ago I griped about the media’s insistence on imposing its preferred one-size-fits-all narrative on Obama’s trip to China.  The narrative I had in mind was the one about 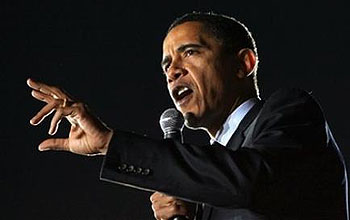 China’s huge dollar holdings driving major changes in policy when the evidence for that was pretty thin, but over at CJR Greg Marx picks up on another one:

As media narratives go, this whole “Barack Obama is a popular individual and a gifted speaker with a compelling personal story, but doesn’t automatically get everything he wants!” thing is getting awfully old, awfully fast.

The theme popped up months ago, when the press began to notice that though America had elected a “change” president, the world was—surprise!—not changing overnight. It cropped up again around the time of the off-year elections, when the media noticed that Obama’s personal appeal is not a magical amulet that can be transferred to unpopular Democrats. And it has framed much of the coverage of Obama’s recently completed trip to Asia.

If it were clear that Obama is pursuing a “biography-as-diplomacy” approach, this question might be pressing. And, if he were pursuing a strategy that rested primarily on his public appeal or his silver tongue, the observations from the NYT and LAT would be more significant, too. But, since evidence that he’s doing so is slight, this sort of frame comes off as more trite than trenchant.

Narratives will always be with us, but it would be nice if they could at least be tenuously based on reality.  The narrative about China’s increasing leverage due to its dollar holdings has at least a little bit of that going for it, even if it gets overplayed, but the “silver tongued orator” narrative has really been plucked out of nowhere.  Yes, Obama is a good speaker, but there’s zero evidence that his administration or his governing style is based on this in any significant way.  Just the opposite, in fact.  So knock it off, folks.