No more minarets in Switzerland:

Swiss voters have supported a referendum proposal to ban the building of minarets, official results show. 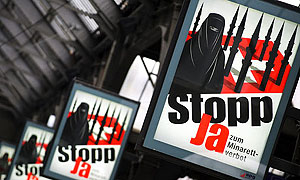 The proposal had been put forward by the Swiss People’s Party, (SVP), the largest party in parliament, which says minarets are a sign of Islamisation.

Is this a sign of the resurgence of hard-right anti-immigrant sentiment in Europe, or is it just an exceptional result from an exceptional country?  Switzerland is a very socially conservative place (its famous multilingual tolerance notwithstanding), so in one sense it’s not a surprise that this referendum passed.  Still, it was polling at only 37% support a week ago and ended up winning with 57% of the vote.  That’s a big swing from just a few final days of campaigning,1 and it suggests that it would hardly be impossible for other European countries to follow suit.2

1Unless, of course, Swiss voters have a tendency to lie to pollsters on sensitive questions like this, as they seem to in America.

2If they had referendums, that is.  Which most of them don’t.  But obviously a referendum isn’t the only way to accomplish something like this.