I’ve sometimes wondered what it would take to get a guy like Dana Milbank to wipe the smirk off his face and get genuinely outraged.  Now I know: listening in on a call with the finance lobby. 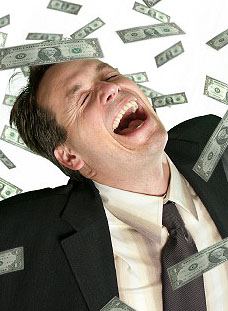 On Tuesday, the American Financial Services Association even held a conference call with reporters to update them on its efforts — successful so far — to torpedo plans for a new Consumer Financial Protection Agency, which would protect people from the sort of lending abuses that led to last year’s implosion.

….”It looks more and more like Senate banking won’t take it up until January or February, and with next year being an election year, that does raise the concern level,” [Bill] Hempler reported with satisfaction. “This could delay the overall effort.” Or, with a bit of luck, kill it outright.

….In Tuesday’s conference call, AFSA’s executives offered the many familiar reasons why government regulations are bad….But the argument most likely to prevail for the financial firms on Capitol Hill was offered by Chris Stinebert, the trade group’s chief. “Especially now, when we’re in a very, very sensitive time, when the capital markets are just starting to recover,” he said, “introducing a high level of uncertainty in the marketplace could be very detrimental.”

Or, to put it another way: Don’t regulate us now because the economy is still suffering from the mess we made because we weren’t regulated the last time. Chutzpah, it appears, is recession-proof.

In other finance lobby news, Simon Johnson reads and explains a new research report from Morgan Stanley insisting that increased capital requirements for large banks would be a terrible thing for the economy:

The bottom line, translated: let us adjust our balance sheets (downwards to some degree) and continue with our existing business models (including unconstrained bonuses), and we will bring you back to growth eventually.  If you mess with us, unemployment will stay high for a long time.  And any future crises that may befall us are just a cost of doing business, and making us whole is just what you have to do.

All this lobbying and more1 will be crashing down on the United States Congress soon, insisting that any but the most anodyne new regulations will wipe out the economy, wreck the banking system, and turn the country over to the Chinese with barely a whimper.  They will be eagerly assisted by Fox News, the entire Republican Party,2 the Wall Street Journal, the business community, and — in a tremendous irony — tea partiers of all stripes, who will somehow be gulled into believing that good, hardworking bankers are under attack from the same malign forces that are trying to kill grandma.  Raise your hand if you think a majority of our members of Congress have the stones to stand up to this.

1And by more, yes, I mean tidal waves of campaign cash.

2Plus, as several commenters have mentioned, a dispiritingly large portion of the Democratic Party.