Roughly speaking, the Stupak amendment is simple: it says that anyone receiving a federal subsidy can’t buy healthcare insurance that includes abortion coverage.  There’s a bit more, but that’s the piece that’s causing most of the backlash from pro-choice forces.

But as bad as that is, there’s a fear that it might be even worse than it sounds.  Anyone who gets a federal subsidy to buy private healthcare insurance is 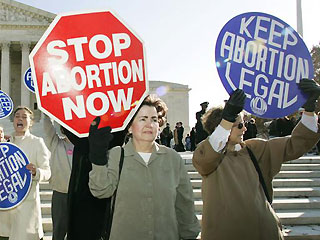 required to buy a policy through the “exchange,” but not everyone who buys through the exchange gets a federal subsidy.  So what if insurance companies decide it’s too much trouble to offer multiple options, and simply remove abortion coverage from every policy offered through the exchange, regardless of how it’s paid for?  Ezra Klein:

If health-care reform began with huge exchanges, in which only a small portion of the participants were on subsidies and the Stupak amendment only applied to a fraction of the market, insurers would probably offer mostly policies that included abortion coverage. In reality, almost 90 percent of the population on the exchanges will be subsidized, so there is no real market for insurers to present a policy that covers abortion. That presents a much bigger problem.

But here’s my question: how much trouble is it, really, for insurance companies to offer two different policies that are identical except for their abortion coverage?  Not much, I’d guess.  As one data point, the Republican National Committee was embarrassed recently when reporters found out that their group health policy included abortion coverage.  Here’s Politico on the RNC’s response:

According to several Cigna employees, the insurer offers its customers the opportunity to opt out of abortion coverage — and the RNC did not choose to opt out.

….“We were not aware of this, obviously, and this will, of course, be fixed,” said James Bopp Jr., a Republican National Committeeman from Indiana. “I think Chairman Steele will see to it that that’s the case.”

So with Cigna, anyway, they already have separate insurance policies because that’s what the market wants.  I’ll bet other insurance carriers do the same, and that means that offering multiple options on the exchange is no trouble at all.  They already have them, there’s no reason not to offer both, and even a modest amount of public pressure will almost certainly be enough to make sure of it.

I’d be happiest if the Stupak amendment were removed entirely in conference, but failing that, it wouldn’t be much trouble to add language requiring insurers to offer both kinds of policy on the exchange.  Ditto for language ensuring that the amendment isn’t interpreted to mean that small businesses getting federal subsidies are prohibited from opting to include abortion coverage if they want to.  If it’s really true that the Stupak bloc in the House merely wants to replicate current restrictions on federal funding of abortions, they shouldn’t have a problem with this.

And on a slightly different topic, I’ll add this: I sure wish that overall subsidy levels in the current healthcare bills produced the same kind of uproar as abortion and the public option.  In terms of real-world effect on real-world people, subsidies are the biggest issue by a mile.  But not a very sexy issue, apparently.  That’s too bad.