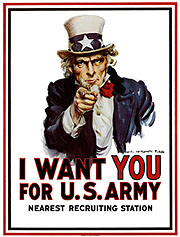 A couple of days ago the Army announced that it had met its recuiting goals for this year.  I didn’t pay much attention to the news, but Fred Kaplan did.  And he’s not buying:

According to the Pentagon’s report, the Army’s goal for fiscal year 2009 was to sign 65,000 new recruits. It actually signed 70,045 — amounting to 8 percent more than the target.

But the picture is less bright than it seems. Though the Pentagon’s report doesn’t mention this fact, in each of the previous two years, the Army’s recruitment goal was 80,000 — much higher than this year’s. The Army met those targets, but only by drastically lowering its standards — accepting more applicants who’d dropped out of high school or flunked the military’s aptitude test.

This year, the recruiters restored the old standards — a very good thing for troops’ morale and military effectiveness — but they signed up 10,000 fewer new soldiers.

Turns out that retention is down too, so that doesn’t explain the lower recruiting goal.  In other words, the Army is shrinking, even though it’s supposed to be growing.  So why do official reports go out of their way to give the opposite impression?