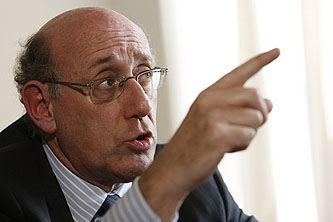 I’m pretty sure that Lefty High Command has instructed us not to refer to the Obama administration’s “coordinators” as czars anymore, but anyway, Obama’s pay czar has apparently decided to show that he’s no potted plant.  Kenneth Feinberg announced today that banks that got a big chunk of bailout aid will have to rein in their top managers:

The seven companies that received the most assistance will have to cut the cash payouts to their 25 best-paid executives by an average of about 90 percent from last year….Total compensation, which includes bonuses, will drop, on average, by about 50 percent.

The companies are Citigroup, Bank of America, the American International Group, General Motors, Chrysler and the financing arms of the two automakers.  At the financial products division of A.I.G., the locus of problems that plagued the large insurer and forced its rescue with more than $180 billion in taxpayer assistance, no top executive will receive more than $200,000 in total compensation, a stunning decline from previous years in which the unit produced many wealthy executives and traders.

There’s certainly some justice in this.  But I’d prefer something less punitive and more useful: a limit on the total bonus pool at these banks.  The point isn’t just that executives who imploded their companies don’t deserve huge paydays — though there’s a lot to be said for that — it’s that financial companies in trouble should be using their retained earnings to build up their capital base, not to pay their staffs outlandish salaries.  Today’s action is nicely symbolic, but insisting on a more wide-ranging cultural change that helps the entire system recover would be even better.