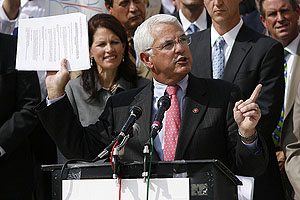 From John Shadegg (R–Ariz.), searching for just the right words to describe Democratic efforts to make sure everyone has access to decent healthcare:

You know, it occurs to me, and I’ll go through these other scandals very quickly, but what we’re really getting here is we’re not just getting single-payer care. We’re getting full on Russian gulag, Soviet-style gulag health care […] It appeared in last Friday’s Wall Street Journal. You can Google it. You can pick up the phone and call Kim Strassel. You can ask her about Soviet-style gulag health care in America, where powerful politicians protect their constituents.

OK, OK, this was really a quote from yesterday.  Sue me.  But it’s a good example of what I mean when I suggest that today’s right-wing lunacy is different from left-wing lunacy of the Bush years.  Sure, there were lefty bloggers who went over the top about Amerika and how the NSA was bringing 1984 to life and so forth, but for the most part you didn’t have members of Congress taking to the House floor and joining in.  They largely managed to keep a slightly more even keel.  But on the Republican side, after a mere few months of Obama, this kind of stuff has become routine.  They’ve joined the Caps Lock crowd feet first.

In other words, they’re nuts.  A Soviet gulag?  Does this clown even know what a gulag is?