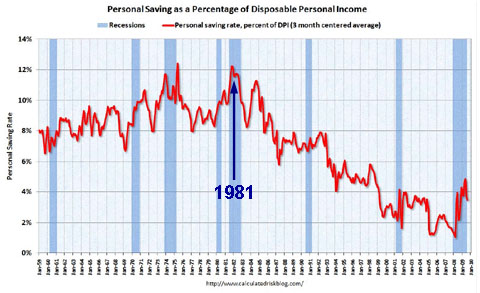 Paul Krugman looks at this chart of the personal savings rate in the United States and concludes that Reaganomics is the most likely reason that it fell off a cliff.  Matt Yglesias admits the timing is right: “But is there a causal link? I think it’s suggestive, but I don’t know what it would be.”

Krugman suggests that part of the cause was Reagan’s blithe acceptance of federal deficits.  After all, if the government didn’t need to balance its books, why should anyone else?  Thus was born an era of binge spending.

Fine.  But I’d point to two other things that Krugman mentions: financial deregulation and stagnant median wages.  Those seem like much more likely villains to me.  Starting in the late 70s, middle class wages flattened out, which meant there was only one way for most people to support the increasing prosperity they had long been accustomed to: borrowing.  At the same time, financial deregulation unleashed an industry that marketed itself ever more aggressively on all fronts: credit cards, debit cards, payday loans, day trading, funky home mortgage loans, and more.  It was a match made in hell: a culture that suddenly glorified debt; an easy money policy from the Fed that made it available; a predatory financial industry that promoted it; and middle-class workers who dived in to the deep end without ever quite knowing why they were doing it.