I was on vacation and not watching the news back in June when Honduran President Manuel Zelaya was ousted in a coup.  Ever since then 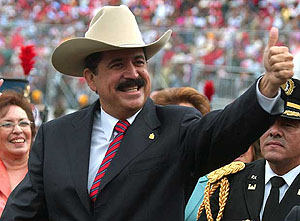 I’ve used this as an excuse not to blog about it, since I hadn’t really kept up with the twists and turns that got it all started.  But today, both sides signed a deal that restored Zelaya to office for the remainder of his term and allowed the scheduled November election to proceed with everyone’s blessing.  Tim Fernholz comments:

If the election in Honduras goes smoothly — doesn’t every foreign-policy article these days include the sentence, “If the election in ________ goes smoothly”? — then Honduras’ democratic system will have been reinforced without harsh sanctions, which would mainly affect the people of the state, or military conflict. Affirming democracy in Latin America is a positive step, especially coming from the United States, which does not have a particularly good history in that department. While the White House’s domestic opposition will no doubt call this deal a sham or attack the president for helping restore a controversial leader to power, this outcome will likely improve inter-American relations, and that is a win for a relatively green foreign-policy team.

The truth is that I still don’t know all the ins and outs of what happened in Honduras and whose side I’m supposed to take.  But what I do know is that conservatives came out of the chute almost instantly with demands that the Obama administration adopt the hardest line possible in favor of the coup leaders.  This appeared to be for no special reason except that Zelaya was friendly with Venezuela’s Hugo Chávez, and to call this idiotic would be an insult to idiots everywhere.  Tim is right: the Obama administration’s calmer approach was the right one, and messy or not, it helped get the job done in a region where the U.S. is not exactly known for subtlety and respect for local customs.  Not bad.