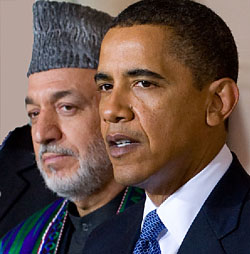 I’m not usually especially smitten with Tom Friedman’s musings on war and nation building, but he’s on the right page here:

I understand the huge stakes in stabilizing Afghanistan and Pakistan. Gen. Stanley McChrystal, our top commander there who is asking for thousands more troops, is not wrong when he says a lot of bad things would flow from losing Afghanistan to the Taliban. But I keep asking myself: How do we succeed with such a tainted government as our partner?

….I am not sure Washington fully understands just how much the Taliban-led insurgency is increasingly an insurrection against the behavior of the Karzai government — not against the religion or civilization of its international partners. And too many Afghan people now blame us for installing and maintaining this government.

….We have been way too polite, and too worried about looking like a colonial power, in dealing with Karzai. I would not add a single soldier there before this guy, if he does win the presidency, takes visible steps to clean up his government in ways that would be respected by the Afghan people.

If Karzai says no, then there is only one answer: “You’re on your own, pal. Have a nice life with the Taliban. We can’t and will not put more American blood and treasure behind a government that behaves like a Mafia family. If you don’t think we will leave — watch this.” (Cue the helicopters.)

If Obama and McChrystal can come up with a truly plausible plan for stabilizing Afghanistan, I think I could gulp hard and support it.  But the absolute bare minimum requirement for such a plan is a national government that’s largely supported by the population.  Like Friedman says, it doesn’t have to be Switzerland, but it has to be good enough.  Without that, Afghanistan really is Vietnam 2.0.