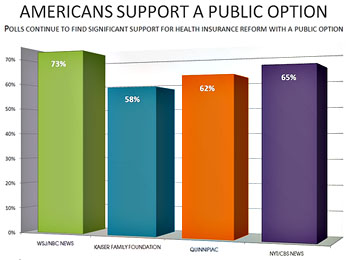 The Office of the Speaker of the House emails to nominate this for chart of the day.  Sure.  Why not.  It’s a good chart.  Bottom line: the public really likes the idea of having a choice between either a private or a public health insurance plan.

In case you missed it, Jon Stewart had a good riff on this last night.  His question: Why are Democrats so lame?  It’s a good one!  They have a huge majority in the Senate, the public is strongly in favor of a public option, and yet….for some reason they can’t round up the votes to pass it.  Hell, they can’t even round up a normal majority to pass it out of the Finance Committee, let alone a supermajority to overcome an eventual filibuster.

If Democrats really do lose the House next year (about which more later), this will be why.  If they don’t pass a healthcare bill at all, they’ll be viewed as terminally lame.  If they pass a bill, but it doesn’t contain popular features that people want — like the public option — they’ll be viewed as terminally lame.  At a wonk level, a bill without a public option can be perfectly good.  But wonks aren’t a large voting bloc, and among people who do vote, the public option is very popular.  So, um, why not pass it?