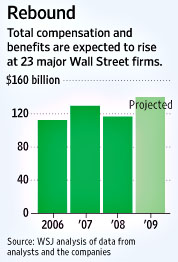 The Wall Street Journal reports that the good times are rolling again:

Major U.S. banks and securities firms are on pace to pay their employees about $140 billion this year — a record high that shows compensation is rebounding despite regulatory scrutiny of Wall Street’s pay culture.

I sort of feel like I’ve run out of things to say about this.  There’s an insanity here that’s almost beyond analysis.  Wall Street can spark an economic slowdown that misses destroying the planet and causing a second Great Depression only by a hair’s breadth — said hair being an 11th hour emergency infusion of trillions of taxpayer dollars — and then turn around and use those trillions to return to bubble levels of profitability within a year.  And they can do it even though the rest of the economy is still suffering through the worst recession since World War II.  It’s mind boggling.

Is there any silver lining here?  Probably not, but I’ll try: If Wall Street can shrug off the worst recession of our lifetimes as if it’s a minor fender bender and get the party rolling all over again in less than 12 months, it means the next bubble is already in the works and its collapse will be every bit as bad as this one.  That in turn means it will almost certainly happen while today’s politicians are still in office.  So maybe news like this will finally spur lawmakers to realize once and for all that the financial industry needs to be cut down to size.  Half measures won’t do it.  Self-regulation won’t do it.  Compensation limits won’t do it.  Byzantine, watered-down rules won’t do it.  Something like a Morgenthau Plan for Wall Street is the only thing that has even half a chance of working.

Will Congress finally get this?  Probably not.  The financial lobby is just too strong.  But we can hope.