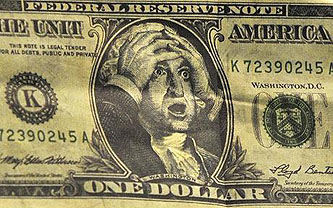 Why is there so much keening and wailing on the right over the decline of the dollar, a technical issue that virtually every economist agrees is (a) inevitable (b) good for America? Apparently the answer is Matt Drudge, who now writes about the weak dollar about as frequently as he writes about hurricanes during storm season.  Eamon Javers at Politico:

Clearly, Matt Drudge has developed a fascination with the declining U.S. dollar.  “He’s fixated on it,” said Tom Rosenstiel, director of the Pew Research Center’s Project for Excellence in Journalism. “There’s no question that Drudge can alter what people are paying attention to.”

This comes via Dan Drezner, who points out both the obvious (a weak dollar is a positive development, not a negative one) and the slightly less obvious (perennial worries that the dollar is losing its status as a global reserve currency are mostly absurd).  Then he puts on his blogging cap:

So, what’s really going on here?  I suspect that with the Dow Jones going back over 10,000, Republicans are looking for some other Very Simple Metric that shows Obama Stinks.  The dollar looks like it’s going to be declining for a while, so why not that?  Never mind that the dollar was even weaker during the George W. Bush era — they want people to focus on the here and now.

This is helped considerably by the fact that upwards of 98% of the country hasn’t the slightest idea of what a “weak” dollar is aside from the fact that “weak” doesn’t sound very appealing, and upwards of 99% hasn’t the slightest idea of what a reserve currency is or why it matters.  This makes it excellent fodder for Trilateral Commission style conspiracy theorizing,1 which in turn makes it excellent fodder for the current intellectual leaders of the conservative movement.  This is the kind of stuff that used to be limited to cranks with mimeograph machines but is now beamed into millions of homes via the wonders of cable TV and the internet.  That’s progress, my friends.

1Remember back when the Trilateral Commission was running the planet?  Good times.  How have they managed to fall so low since then?