Matt Yglesias muses on a question that’s crossed my mind a few times too: 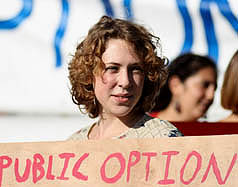 of health care and opposes adding a public option to it. But suppose a public option does get added. Does that suddenly take a vast package of reforms that he played a key role in crafting and turn it into a terrible bill? Why would that be?

Obviously there’s no universal answer to this.  Different people think different things.  But I suspect there really is an asymmetry on this question at the elite wonk level.  Ordinary activists and citizens may feel equally strongly about the public option on both sides, but healthcare pros don’t.  On the liberal side, the folks who study this for a living mostly like the idea of a public option (provides competition, helps lower prices a bit, etc.) but don’t think it’s vital to the success of the reform effort.  On the conservative side, though, opinion is much more entrenched because right-wing think tank types genuinely believe that it’s a steppingstone to a fully public single-payer system.  And they might be right!  But if that’s the case, then they really do have a lot more at stake than the lefties.

Anyway, this is just a guess.  But if it’s right, then this attitude spills over into elite opinion and from there into the halls of Congress.  The result is that there’s a big chunk of the Democratic caucus that’s lukewarm toward the public option, a smaller chunk toward the center that’s actively opposed because they don’t like single-payer any more than conservatives do, and then monolithic opposition from the right.  And it’s all because our wonks are a little too honest for their own good.