Did the country really explode in anger at townhalls across the country this summer?  Or was it just a tiny fraction of the population that got outsize attention by bored cable nets during the dog days of August? 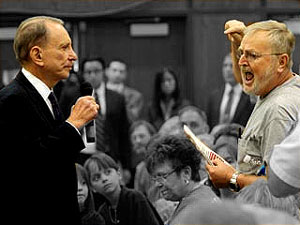 E.J. Dionne talked to some returning Democratic House members this week and concludes it was more the latter than the former:

“I think the media coverage has done a disservice by falling for a trick that you’d think experienced media hands wouldn’t fall for: of allowing loud voices to distort the debate,” said Rep. Mary Jo Kilroy, whose district includes Columbus, Ohio.

….The most disturbing account came from Rep. David Price of North Carolina, who spoke with a stringer for one of the television networks at a large town-hall meeting he held in Durham. The stringer said he was one of 10 people around the country assigned to watch such encounters. Price said he was told flatly: “Your meeting doesn’t get covered unless it blows up.” As it happens, the Durham audience was broadly sympathetic to reform efforts. No “news” there.

….When I reached Rep. Tom Perriello last week, he divided the crowds at the 17 town halls he had held to that point in his largely rural Virginia district into three groups: conservatives, for whom the health-care battle is “about big government, socialism and all that”; the left, for whom “it’s about corporate accountability”; and a “middle” for whom “it’s about health care costs” and the problems with their coverage.

But the only citizens who commanded widespread media coverage last month were the right-wingers. And I bet you thought the media were “liberal.”

There’s unquestionably been a decline in support for healthcare reform in the polls, but is that cause or effect?  If Dionne is right, it’s less a reflection of genuine discomfort than it is a reflection of distorted media coverage.  Thanks, cable news!