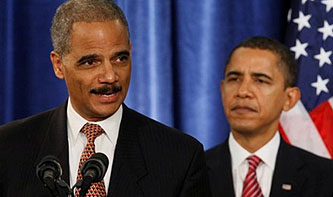 The Department of Justice is planning to roll out new standards that would make it tougher for the government to unilaterally throw out lawsuits by asserting the state secrets privilege:

The new policy requires agencies, including the intelligence community and the military, to convince the attorney general and a team of Justice Department lawyers that the release of sensitive information would present significant harm to “national defense or foreign relations.” In the past, the claim that state secrets were at risk could be invoked with the approval of one official and by meeting a lower standard of proof that disclosure would be harmful.

….”What we’re trying to do is . . . improve public confidence that this privilege is invoked very rarely and only when it’s well supported,” said a senior department official involved in the review, who spoke on the condition of anonymity because the policy had not yet been unveiled. “By holding ourselves to this higher standard, we’re in some way sending a message to the courts. We’re not following a ‘just trust us’ approach.”

….The Justice Department officials said Tuesday that their agency would give regular reports on their use of the state secrets privilege to oversight committees on Capitol Hill and that the attorney general would pass along “credible” allegations of wrongdoing by government agencies or officials to watchdogs at the appropriate agencies, even if the administration had decided to invoke the legal privilege in sensitive cases.

I’m all for this, but unless it’s backed by the force of law we’re still just trusting the government to do the right thing.  Maybe they will, maybe they won’t.  Maybe this administration will and the next one won’t.  Who knows?  So I hope Pat Leahy keeps beavering away on legislation to codify this stuff.  DOJ can’t have any objection to Congress making sure they do what they say they’re going to do anyway, can they?