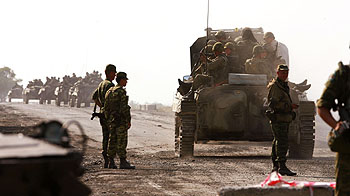 A long-awaited EU report on the causes of the Russia-Georgia war last year has finally been released.  The New York Times reports the reaction from both Russia and Georgia:

Vladimir Chizhov, Russia’s envoy to the European Union, told reporters in Brussels that the central finding concerned Aug. 7, and that he hoped it would prompt foreign leaders to withdraw their support for Georgia’s president, Mikheil Saakashvili. The report provided “an unequivocal answer to the main question of who started the war, and it says squarely that it was Georgian massive shelling and an artillery attack which marked the beginning of large-scale hostilities.”

In Tbilisi, the Georgian capital, Temuri Yakobashvili, the minister of reintegration, said the report exonerated Georgia because it emphasized the long-term buildup of tensions. “This report will kill the Russians’ spin that it was Georgia who started the war, and it will finish all these notions and speculations about who started the war,” Mr. Yakobashvili said. “The first line of this report states that the war didn’t start on Aug. 7.”

That’s my kind of report: one that resolves nothing.  But in fairness, how could it?  Its conclusions were pretty obvious to everyone aside from hardened ideologues long ago: Russia spent years trying to goad Georgia into war, and in August of last year Georgia finally took the bait.  In a situation like that, who you blame is almost entirely a matter of who you feel like blaming.

So there’s no knockout blow here.  Still, I give it to Russia on points.  Georgia was hardly innocent in all this, but Russia’s goals were pretty clear all along, and they obviously kept escalating tensions until they got the reaction they wanted.  They deserve all the condemnation they got for that.