This is a guy that’s got the 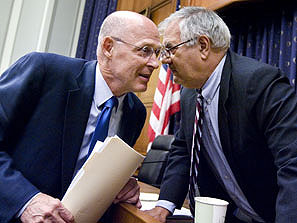 intellect, he’s got the energy, he cares, and he wants to legislate, knows how to legislate. He’s interested in getting across the finish line.

The congressman in question is Barney Frank, as described in a series of interviews given to Todd Purdum in Vanity Fair.  Paulson, who comes across in these interviews as almost astonishingly naive about how Washington works, basically says that Frank was the only honest, straightforward guy on the entire Hill.  “I just wish he were a Republican,” he said.

Paulson has nice things to say about Nancy Pelosi too (“She was engaged, she was decisive, and she was really willing to just get involved with all of her people on a hands-on basis”).  And Tim Geithner (“He understands Treasury. He’s an internationalist….He’s smooth, but there’s … inside, he’s tough as steel”).  But his fellow Republicans?  Not so nice:

“It’s not enough to just sit there and say, ‘I’m right, the other guys are wrong,’ ” he told me at one point, explaining why it was often so difficult working with some of the more doctrinaire members of the White House staff. “It’s not that there’s anything wrong with ideology. I’ve got my ideology and my philosophy. But those that say, ‘I won’t compromise,’ to prove a point, and then ‘I’m going to point a finger afterwards and say, See, I was right … ’ ”

Sounds like he and John DiIulio could have a very simpatico conversation about the Bush White House if they ever got together for a beer or three.