This is from Binyamin Appelbaum’s front-page story in today’s Washington Post about the Fed’s unwillingness to regulate subprime lending by affiliates of commercial banks:

“There was a long period when things were going very well and regulation was viewed as something that got in the way,” said Alice Rivlin, the Fed’s vice chairman from 1996 to 1999 and now a fellow at the Brookings Institution. 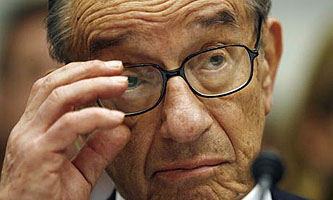 big-picture economists focused on the health of the broader economy rather than the problems faced by individual borrowers.

[Former Fed chairman Alan] Greenspan said in an interview that he did not think the Fed was suited to policing lending abuses because of its focus on broader issues, but he added, “I’m not sure anyone could have done it better.” He said the administration’s plan to create a consumer protection agency was “probably the right decision.”

Greenspan is exactly right.  This is more than just the usual issue of regulatory capture (though it’s that too).  The Fed is a bad choice to regulate this stuff because their first priority is always going to be macroeconomic stability.  That’s exactly as it should be, but it means that regulating consumer products will simply never be anything more than an afterthought for them.

The same is true for virtually every other existing regulator too: they already have settled missions and settled cultures that value specific tasks.  Consumer lending regulation isn’t one of them, so it will never be able to compete effectively for attention.  The only place it has a chance of succeeding is at a new agency in which everyone from top to bottom considers it their primary mission in life.  That’s what a strong CFPA brings to the table.

Will it eventually be captured by the industry it’s supposed to regulate?  Sure.  And then we’ll have to try to fix things again.  But no solution is eternal, so that’s hardly a good reason not to act.  We should set up a CFPA that’s as strong as we can make it; that has its incentives aligned as precisely as we can align them; and that has an institutional base of power that allows it to actually get things done.  It won’t be perfect, but it will be a lot better than anything we have now.