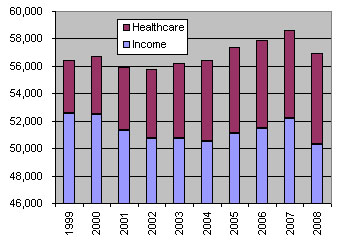 But there’s more to your earnings than just cash income.  As we’ve all been reminded over and over lately, healthcare costs are skyrocketing, which means that healthcare premiums paid by your employer have risen dramatically during the past decade.  That’s all part of your compensation too.  So if you add in employers’ contributions to healthcare premiums, how do things look then?

Answer: a little better, but still nothing to write home about.  Roughly speaking, if you add together both cash income and healthcare premiums and adjust everything for inflation, median income over the past decade has increased from about $56,400 to $57,000.  In other words, a whopping 1%.  It really has been a lost decade1.

1Though not for everyone.  During the same period, the average income of the richest tenth of a percent increased by about $2 million, or about 35%.  No wonder there wasn’t much left for the rest of us.

NOTE FOR NERDS: There’s no bulletproof source for the value of healthcare premiums over time, and in any case the value differs depending on whether you’re married, single, have kids, etc.  So here’s what I did to get a rough cut on the data.

Basic cash income table is here.  Healthcare premium estimates for the past decade are here.  I subtracted the employee contribution and then took the average of family and single coverage.  This may understate the cost a bit, but not by much.  Then I applied the GDP deflator to put all the healthcare costs in 2008 dollars.  This is strictly a cheap and cheerful bloggy estimate, but it’s probably not too far off the mark.