Is Moby Dick America’s great national epic, as Matt Yglesias (along with his tame cabal1 of American Lit professors) says?  Or is it really a terrorist handbook meant to indoctrinate our youth in anti-whale2 hysteria?  The New Yorker’s Close Read blog shows itself unafraid to confront the truth:

Richard Brody […] has been writing about “The Baader Meinhof Complex.” But one detail he doesn’t explore is the appearance of a German edition of “Moby-Dick” in the movie: imprisoned members of the Red Army Faction use it as the key to their enciphered messages to co-conspirators on the outside. It turns out that Gudrun Ensslin, one of the group’s founders, was obsessed with the book, and thought that it told the story of the R.A.F.’s struggle against the state. 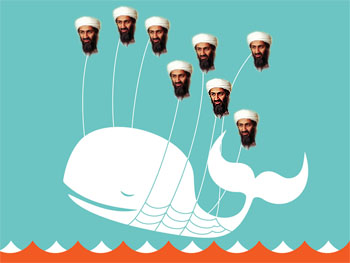 She gave the terrorists Moby-codenames: Baader was Ahab, Holger Meins was Starbuck, and she herself was the cook. […] Horst Mahler, their lawyer and later, as Brody writes, a neo-Nazi, was Captain Bildad. Stefan Aust, who wrote the book the movie was based on, told an interviewer that “to understand the R.A.F., you have to read Moby Dick.”

Aust explains further: “The whale is Leviathan, and Leviathan is a symbol for the state, a state whose papier mâché mask of deceptive appearances the RAF was committed to smashing.”  This closely echoes Osama bin Laden’s published views of the decadent West3, which makes it no surprise that blame-America-first liberals like Matt think impressionable children should all be forced to read Melville’s seditious maritime propaganda4.  Nor should anybody be surprised on Tuesday if Barack Obama exhorts our kids to “work hard and read American classics like Moby Dick.”  Today it’s a white whale in the classroom, tomorrow it’s sharia in the White House.

1I believe this is the correct term of art in conspiratorial circles to imply a Jewish conspiracy without actually saying so.  Right?

2Whale = United States, of course.  It’s all about the imagery in Moby Dick.

3I’ll look up the page number later.  But I’m pretty sure about this.

5This isn’t actually a footnote.  I just want to mention that I created the bin-Ladenized version of the Fail Whale myself.  A new career in graphic design surely beckons.

6In comments, John Sully provides a better and more erudite extended metaphor.  Or simile.  Or something: “I think you meant flensing knives, which are used to cut the blubber from the whale for rendering. Flensing knives are similar to box-cutters, the implements with which bin Laden’s minions symbolically cut the fat from the corpse of Amerika so that the county was rendered impotent against the power of Islam.”