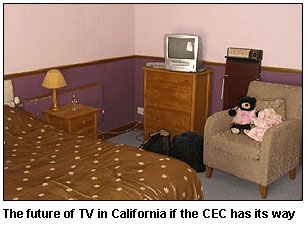 In a move clearly inspired by Barack Obama’s plan to turn the United States into a grim socialist hellhole, California plans to regulate giant TVs:

The first-in-the-nation TV efficiency standards would require electronics retailers to sell only energy-sipping models starting in 2011. Even tougher efficiency criteria would follow in 2013.

….The rules, which took more than a year to develop, are designed to shave $8.1 billion off Californians’ electricity bills over a 10-year-period. That works out to $30 per set per year, according to commission officials.

It will also help California utilities head off the need to build more power plants just so residents can watch “American Idol” and other shows. TVs already account for 10% of residential energy use in California, driven largely by surging demand for large-screen TVs. Strict state mandates for cutting greenhouse gas emissions are further pressuring officials to act.

I suppose Congress could override this rule if TVs were part of interstate commerce, but that’s a pretty ridiculous notion since practically everyone buys televisions from stores in their own state1.  So I guess we’re out of luck.  We Golden Staters will have to continue our desperate struggle against the jackboot of the California Energy Commission all by ourselves.

1In case you don’t get the joke, see here.