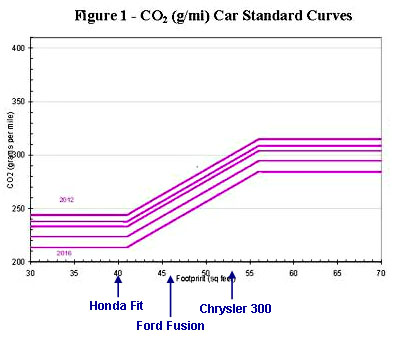 Miller-McCune magazine points out today that we’ll soon have new CAFE fuel standards.  EPA and the Department of Transportation announced their proposed new rules on Tuesday, and in an effort to find something interesting to say about them I present you with this chart.

Normally, CAFE is a DOT program.  But the Supreme Court recently ruled that EPA was required to regulate greenhouse gases under the Clean Air Act, so now it’s a two-agency operation.  EPA’s part isn’t to directly regulate fuel economy, it’s to regulate CO2 — though this largely amounts to the same thing.  Basically, it works like this: you multiply a car’s track width by its wheelbase to come up with its “footprint” in square feet.  Then you go to this chart, which tells you how much CO2 it’s allowed to emit.  A subcompact, for example, will be allowed to emit no more than 204 grams of CO2 per mile in 2016.  (That’s what the technical appendix says, anyway.  The chart seems to be offset slightly high along its entire length.)

The Ninth Circuit Court has had problems with the whole “footprint” idea in the past, but EPA and DOT apparently hope that these new regs will pass judicial muster.  They also hope that car companies won’t just build bigger cars, thus doing an end run around the standards.  In fact, here’s what they hope the new rules will accomplish: