Here’s an email I got today from Richard Viguerie’s shop:

In one of the White House’s creepiest acts yet, it has posted a blog, which amounts to asking citizens to turn in those opposing Obamacare.

They even set up an email address so citizens may tell the White House who is spreading “disinformation” (wink, wink) about Obamacare.

Can you believe it?  President Obama and his radical community organizers at the White House want literally to “keep track” of those who disagree with the government-run, potentially bankrupting health care bill, with its rationing of medical procedures to control costs, which Obama and Democrats in Congress are trying to ram through the system and into law.

They want information passed through “emails or even casual conversation.”  How Orwellian is that?

Totalitarian regimes, such as Nazi Germany or the Soviet Union, used similar tactics (without email, of course) to keep tabs on dissidents and other critics of those regimes.

I love the parenthetical remark at the end: “without email, of course.”  Wouldn’t want to be historically inaccurate or misleading!

OK, fine.  Richard Viguerie is nuts and it’s not fair to tar all of conservativedom by pretending he speaks for them.  But Steve Benen, who pointed out earlier today that one of the differences between lunacy on the left and lunacy 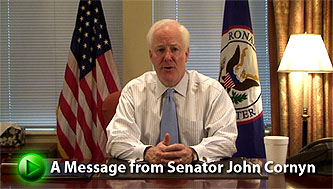 on the right is that right wing lunacy frequently migrates from the fringe to serious political actors, informs me that Sen. John Cornyn (R–Tex.) is now serving up the same derangement:

Cornyn says this practice would let the White House collect personal information about people who oppose the President.

“By requesting citizens send ‘fishy’ emails to the White House, it is inevitable that the names, email, addresses, IP addresses and private speech of U.S. citizens will be reported to the White House,” Cornyn wrote in a letter to Obama. “You should not be surprised that these actions taken by your White House staff raise the specter of a data collection program.”

Cornyn asked Obama to cease the program immediately, or at the very least explain what the White House would do with the information it collects.

God save us.  Before long we’re going to have start inventing new words to describe these guys.  My thesaurus is running dry.