Michael Pollan had a much-quoted piece in the New York Times magazine last week about the decline of actual cooking, the seemingly paradoxical surge in the popularity of TV cooking, and the evolution of what we eat.  Here’s a piece:

After World War II, the food industry labored mightily to sell American women on all the processed-food wonders it had invented to feed the troops: canned meals, freeze-dried foods, dehydrated potatoes, powdered orange juice and coffee, instant everything. As Laura Shapiro recounts in “Something From the Oven: Reinventing Dinner in 1950s America,” the food industry strived to “persuade millions of Americans to develop a lasting taste for meals that were a lot like field rations.” 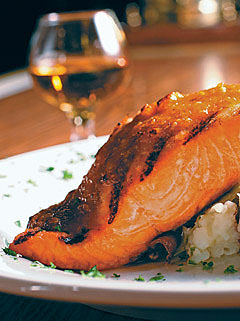 So here’s something I’ve been curious about for a while: most people seem to treat cooking as a binary thing.  Either you do it or you don’t. But there’s actually a broad range here, and I wonder how many people are more or less like me on the cooking continuum?  I don’t eat prepared food because I don’t like field rations no matter how brightly they’re packaged.  On the other hand, neither do I cook — at least not in the conventional sense of hauling out a recipe and making something.  For example, if I’m on my own1 here’s my recipe for making salmon:

1. Place a piece of salmon in a baking ban.

2. Put the baking pan in the oven.

3. Take it out after a while and eat it.

So is this cooking?  On the pro side: it’s from scratch!  On the con side: it only has one ingredient.  (In the main dish, anyway.)  I don’t have the skill or the desire to do much more, but even at that I prefer a simple, freshly baked piece of salmon to, say, Lean Cuisine’s “wild salmon on a bed of whole wheat orzo pasta with yellow and orange carrots and spinach in a basil sauce.”  And my dinner doesn’t take any more time to prepare than theirs, either.

Pollan demonstrates some sensitivity toward this continuum when he talks about what really counts as cooking and what doesn’t.  Here he is talking to food marketing researcher Harry Balzer:

Years ago Balzer noticed that the definition of cooking held by his respondents had grown so broad as to be meaningless, so the firm tightened up the meaning of “to cook” at least slightly to capture what was really going on in American kitchens. To cook from scratch, they decreed, means to prepare a main dish that requires some degree of “assembly of elements.” So microwaving a pizza doesn’t count as cooking, though washing a head of lettuce and pouring bottled dressing over it does. Under this dispensation, you’re also cooking when you spread mayonnaise on a slice of bread and pile on some cold cuts or a hamburger patty.

….I kept asking him what his research had to say about the prevalence of the activity I referred to as “real scratch cooking,” but he wouldn’t touch the term. Why? Apparently the activity has become so rarefied as to elude his tools of measurement.

“Here’s an analogy,” Balzer said. “A hundred years ago, chicken for dinner meant going out and catching, killing, plucking and gutting a chicken. Do you know anybody who still does that? It would be considered crazy! Well, that’s exactly how cooking will seem to your grandchildren: something people used to do when they had no other choice. Get over it.”

So, returning to the excerpt that kicked off this post, here’s the question: how many people are there who, like me, (a) resist eating processed food because it reminds them of field rations, but (b) can’t really cook in the conventional sense and therefore just end up eating simple but freshly prepared dishes all the time?  Surely I’m not entirely alone in this, am I?

1As you might guess, this isn’t very often.  Marian is quite a good cook and does most of the dinner preparation chez Drum.  It’s a good thing, too.