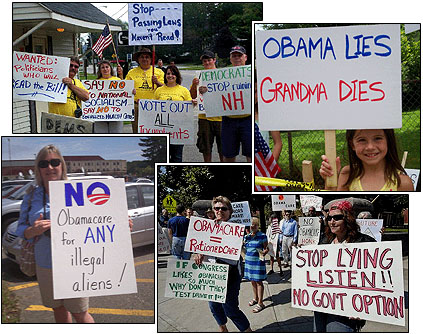 Is there any reason for optimism on healthcare reform?  In a weird sort of way there is.

Think about this: It turns out that heathcare reform is so fundamentally popular that the only way Republicans have been able to have any impact at all on the debate is via a campaign of demagoguery so egregious and brazen that Huey Long himself probably would have hesitated a moment or two before jumping in.  For the first six months of the year nothing else had made a dent, so finally they had to resort to a full month of silly season frenzy about death panels and secret White House enemies lists and “healthcare racism” and benefits for illegal immigrants.  The only thing missing was sharks with laser beams attached to their heads.

It’s been a helluva show.  But here’s the weird fact: despite all this, public support for healthcare reform has declined only modestly.  In fact, less than you’d expect even without the August freak show we’ve just gone through.  Generally speaking, people still approve of Obama, still approve of his healthcare plan, still prefer Democrats to Republicans on the issue, and still support giving people the choice of being covered by either a public or a private plan. Fox News and FreedomWorks have managed to spin their audiences into a hysterical lather about fascism and socialism and pulling the plug on grandma, but in the end the shrieking crowds who showed up at the townhalls were tiny in number.

So that’s the optimistic view: the Fox/FreedomWorks crowd has created some great political theater, but underneath it all not a lot has changed.  If Democrats can just take a deep breath after the trauma of being yelled at all summer, they’ll realize that the loons at their townhalls represented about one percent of their constituency; that the public still wants reform and will reward success; that the plans currently on the table are already pretty modest affairs; and then they’ll stick together as a caucus and vote for them.  And that will be that.

Unfortunately, that’s also the reason for pessimism: can Democrats still think straight about all this?  When Chuck Grassley announces dolefully that maybe healthcare needs to be rethought now that the people have spoken, he says it like he really means it.  And even some Dems fall for it.  So success depends on the Democratic caucus seeing through the “heartland uprising” charade and showing some backbone.  The odds might not be so great on that.