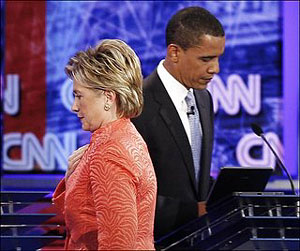 Yesterday Paul Krugman reminded us that preferring Barack Obama to Hillary Clinton because you wanted to avoid the Clinton psychodrama of the 90s was always a vain hope.  Back in early 2008 he wrote, “Any Democrat who makes it to the White House can expect the same treatment: an unending procession of wild charges and fake scandals, dutifully given credence by major media organizations that somehow can’t bring themselves to declare the accusations unequivocally false.”  Ezra Klein, chatting online about town hall hysteria, added, “This is how the conservative movement organizes against major pieces of liberal legislation. It’s not about a particular moment or leader.”

This is unquestionably true, but I’d just like to add one thing.  If Hillary Clinton had won last year’s Democratic primary and gone on to become president, and then this year’s town hall meeting had turned into insane gatherings of lunatics yelling about death panels, every single pundit in Washington — Every. Single. One. — would be blaming it on her.  Their unanimous take would be: Democrats knew that she was a divisive figure and chose to put her in the White House anyway.  It’s hardly any wonder that conservatives have gone nuts, is it?