RNC chairman Michael Steele unveiled his party’s latest appeal to senior citizens today.  I’ve edited it slightly to save you some time:

Steele, it turns out, really really loves Medicare.  He just hates government-run healthcare programs.  Or something.  Hard to say, really. 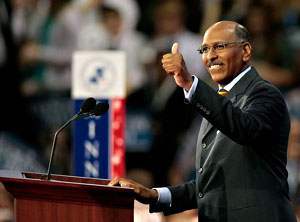 As it turns out, though, this is too raw even for some of the folks over at NRO.  “Such blatant finger-in-the-wind leadership from the RNC is disappointing,” says Robert Costa.  And the response from AARP was entertaining too: “AARP agrees with Chairman Michael Steele’s goals for reforming our health care system, and we are pleased nothing in the bills that have been proposed would bring about the scenarios the RNC is concerned about.”  Their press release went on to explain that they support pretty much everything Obama has proposed.  And Roy Blunt’s former chief of staff twittered: “RNC Chair Michael Steele is an idiot. Past time for him to go.”  Though, in fairness, that was about Steele dissing Blunt on the radio this morning, not about healthcare.

For Michael Steele, it was just another day at the office.  He’s the gift that keeps on giving.