According to Mike Crowley, Bruce Riedel said this at a Brookings event earlier this week:

The triumph of jihadism or the jihadism of Al Qaeda and the Taliban in driving NATO out of Afghanistan would resonate throughout the Islamic World. This would be a victory on par with the 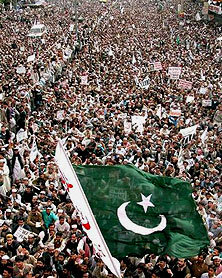 destruction of the Soviet Union in the 1990s. And, those moderates in the Islamic World who would say, no, we have to be moderate, we have to engage, would find themselves facing a real example. No, we just need to kill them, and we will drive them out. So I think the stakes are enormous.

Riedel was chair of a White House team that reviewed U.S. policy on Afghanistan and Pakistan earlier this year, so his opinion isn’t one you can easily dismiss.

But how reasonable is it?  It’s probably true that Pakistani moderates are skeptical about our willingness to stick things out for the long haul, so they often hedge their bets by trying to stay on our good side while they strike deals with the Taliban on the side.  After all, Americans are a wee bit unpopular in Pakistan these days, so why not?  What’s more, it’s a pretty safe game since these same moderates know perfectly well that we don’t have enough leverage to ever really call them out on this tap dancing.

At the same time, neither Pakistani moderates nor, more importantly, the Pakistani army, would ever put up with any serious effort by the Taliban to mount a coup.  The army plays a sometimes dangerous game, trying to use these terrorist groups as useful foot soldiers in its forever war with India, but other than that they’ve never had any real use for them.  The more important question, then, is what would happen if Islamist elements in the Pakistani army gained more control than they have now and started cooperating with Islamist groups more seriously?  If the U.S. withdrew from the region and radicals claimed victory, would all this stop being a game and start becoming all too real?

Nothing is impossible, but at its core this is just a sophisticated version of the same domino theory that dominated U.S. thinking in Southeast Asia in the 50s and 60s.  That led us into a disastrous war then, and it could do the same now if the Obama administration starts getting too wrapped up in febrile thinking like this.  After all, if you assume enough dominos, you can come to just about any conclusion you want.  I sure hope they’re not taking this more seriously than it deserves.

More in the same vein from Michael Cohen here.