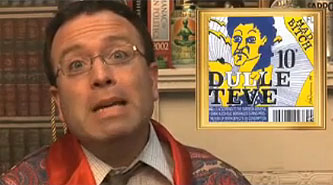 In an episode of “Mouthpiece Theater” last week, Dana Milbank and Chris Cillizza of the Washington Post joked about what brands various luminaries might be served at future beer summits.  For Hillary Clinton, they suggested “Mad Bitch.”

Ha ha ha!  Well, Mouthpiece Theater has been cancelled and Milbank and Cillizza have apologized.  But Bob Somerby isn’t happy:

We’ve long been aware of Milbank’s oddness. But you haven’t seen “corporate media clueless chic” until you read the apology the bosses beat out of Cillizza. Each fellow was required to feign regret; below, you see how Christopher did it. So you’ll know, his blog at the Post is called “The Fix:”

CILLIZZA (8/5/09): I would like to personally apologize for the content in last Friday’s video as it was inconsistent not only with the Post brand but, more important and personal to me, the Fix brand which I have worked so hard to cultivate.

Good God, that’s awful! Calling a woman a “bitch” is, at this level, remarkably stupid. Unless you’re a modern, upper-end “journalist,” in which case the practice is inconsistent with a long string of brands! Never mind the denigration of the woman in question! The real harm here was carelessly done to Cillizza’s beloved Fix brand!

This is something that bugs me.  I’m not quite as willing to forgive and forget this episode as MoJo’s editor is, but neither do I think it was exactly a hanging offense.  Jokes go awry all the time.  More to the point, though, Cillizza apologized.  But these days, that’s never good enough.  Either it’s a “non-apology apology” or it’s not groveling enough or it’s not sincere enough or it came too late or it’s an unforgivable crime and no apology can ever erase the stain.

Or something.  Get over it, folks.  Cillizza screwed up, but he groveled plenty for my taste. “I would like to personally apologize” is admirably direct, and there’s nothing wrong with also acknowledging that his reputation is going to take a hit from this.

I’ve mentioned this before, but I sometimes wonder why anybody ever bothers to apologize for anything anymore since it never seems to do any good.  I remember that someone in comments to that post suggested that apologies should be done for their own sake, not in hopes of getting forgiveness.  That’s an admirable sentiment, but it’s also fabulously innocent of human nature.  Like it or not, public apologies are hard to do, and people hope to get something out them.  If all they get instead is more grief, they’ll quit bothering with them.  Learning how to accept an apology is as important as learning how to give one.