One close Obama ally predicted to me: “He’s going to become increasingly specific — and increasingly persistent — about the things he does and doesn’t want” in the health care bill. This afternoon found the President knee-deep in negotations with the conservative 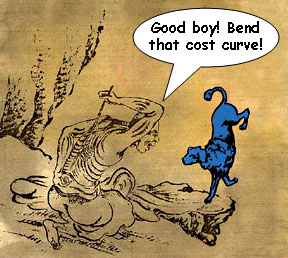 Democrats known as “Blue Dogs,” who have been slowing down Energy and Commerce Committee Chairman Henry Waxman’s efforts to get a bill through his panel. And as a result, the President and the conservative Democrats are making common cause on one cost-containment measure that both would like to see added to the House bill.

In a conference call with a group of reporters after the session, Obama Budget Director Peter Orszag said that the White House and the Blue Dogs agree that the “biggest missing piece” of the House bill is a proposal — similar to one championed in the Senate by Democrat Jay Rockefeller — to take the job of setting Medicare reimbursement rates out of the hands of Congress, and turn it over to an independent agency that presumably would have more expertise — and more insulation from political pressure. (You can read our earlier discussion of it — and Orszag’s argument for it — here.) The idea has also won words of praise from the Mayo Clinic on the very blog where it criticized the House bill yesterday. And Obama’s engagement may be bringing the Blue Dogs aboard.

Right now rate setting is little more than a naked annual porkfest, and there’s really no good reason Congress should be involved in it except at the hundred-thousand foot level anyway.  I don’t know if giving it to an independent agency will actually contain costs very much, but if this is what it takes to bring the Blue Dogs on board it’s fine with me.