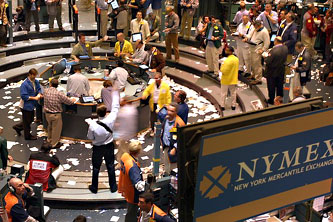 Were speculators responsible for the spike in oil prices last year?  The Wall Street Journal has two stories on the subject today.  First up, the news from London:

Britain’s financial regulator has found no evidence that speculators are behind big swings in oil prices, as politicians in the U.S., the U.K. and elsewhere have suggested, according to people familiar with the matter.

The Commodity Futures Trading Commission plans to issue a report next month suggesting speculators played a significant role in driving wild swings in oil prices — a reversal of an earlier CFTC position that augurs intensifying scrutiny on investors.

In a contentious report last year, the main U.S. futures-market regulator pinned oil-price swings primarily on supply and demand. But that analysis was based on “deeply flawed data,” Bart Chilton, one of four CFTC commissioners, said in an interview Monday.

….Mr. Chilton said the new report will contain a more-thorough analysis of the investors in contracts tied to oil and other commodities, and reveal cases in which single traders hold massive market positions. “We now have multiple sources, and confidence from different sources,” he says. He said he believes the data on trading outside exchanges is also more reliable.

I’ll remain agnostic until both the FSA and the CFTC actually release their reports, but the CFTC study should be the more interesting of the two, since proving a case is generally more difficult than the opposite.  Stay tuned.