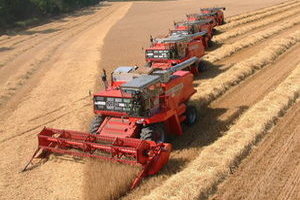 check back through my archives for my many posts posts on the subject. It doesn’t seem to be a subject that captures the imagination, possibly because there’s not a great deal of partisan hay to be made from the subject. I’d still like to know the answer to a question I posed nearly a year ago to Candidate Obama: how would he revive the Doha trade talks?

I sort of feel his pain.  But I’m not sure that lack of partisan venom is the reason for this.  More likely it’s because everyone has just given up.  To me, writing about the Doha round is sort of like griping about how big states should have better representation in the Senate or musing about how we ought to eliminate the Defense Department.  I mean, if that’s what floats your boat, fine.  The blogosphere is deep.  But we all know this stuff is never going to happen, so it’s sort of a waste of time, isn’t it?

Trade talks aren’t quite that bad.  But they’re close.  The Doha round in particular lives or dies based on the willingness of rich nations to substantially reduce tariffs and subsidies on agricultural products, and seriously, what are the odds of that?  We can’t even have a serious discussion about reducing subsidies on corn ethanol, possibly the stupidest use of taxpayer dollars in the past century, let alone reducing farm support payments to ConAgra and Archer Daniels Midland.  Meanwhile, the European attitude toward farming makes ours look positively levelheaded and beneficient.  Paris would probably go up in flames if EU farm payments were ever rationalized.

So: what are the odds of making progress on agricultural issues?  Especially these days, you’d need scientific notation to express it properly.  Might as well wish for a pony instead.