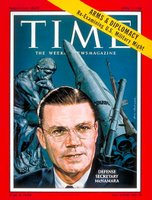 Robert McNamara has died.  Lots of people a little older than me won’t agree with this, but I’ve always felt sorry for him.  I think part of the reason is that his personality is a lot like mine — it’s mine squared or cubed or to the tenth power or something, but still recognizably mine.  And so it’s easy for me to believe that if I had been in his situation I might have ended up doing many of the same things he did: overanalyzing the details, burying myself in work, staying too loyal to a cause for too long, avoiding the moral consequences of what I was doing, and then ending up haunted by it for the rest of my life.

That’s no kind of excuse, of course.  I might have done what he did in the same circumstances, but I didn’t.  He did.  And yet, even at that, at least he figured things out eventually.  That’s a helluva lot more than some of the other architects of Vietnam did.  Most of them didn’t resign, didn’t admit error, and apparently didn’t even feel much anguish over their roles aside from the purely selfish anguish of being objects of public scorn.  McNamara’s anguish may have seemed rather technical and remote to a lot of his critics, but that’s just who he was.  At least it was something.

Anyone old enough to have lived through the 60s as an adult probably won’t feel much sympathy for this point of view.  But it’s hard for me not to.  He’s a cautionary tale for people like me.  R.I.P.