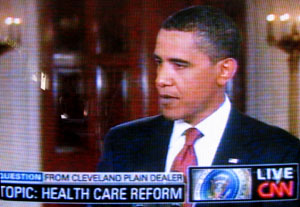 Half an hour into tonight’s press conference Barack Obama has answered a grand total of three questions.  This is not a good performance.  He really needs to pick up the pace and make his answers crisper and more comprehensible.

UPDATE: Aside from the rambling nature of his replies, I don’t think Obama has been good on substance either.  His opening statement had a little bit of good stuff about healthcare security, but he’s spent the vast bulk of his time on deficits and cost cutting.  That’s just not a good sales job.

UPDATE 2: All done.  I’m curious to hear what other people thought, but this really struck me as nowhere near his usual performance.  Obama avoided giving direct answers, rambled a lot, kept interrupting himself with asides, and didn’t explain things in terms that ordinary viewers were likely to understand.  He’s supposed to be the communicator-in-chief, but I wouldn’t be surprised if a lot of people came away more confused than they were when they tuned in.  Bottom line: There were bits and pieces that were fine, but overall I’d give it a C-.  Other comments?