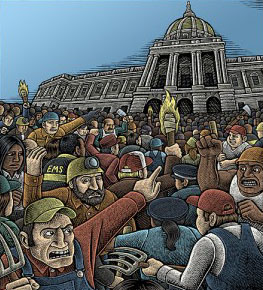 I miss Max Sawicky. But he’s back temporarily this week, and today’s sermon is about the origins of bubbles and other economic catastrophes.  Is fundamental irrationality the wellspring of financial chaos?  Nope:

What’s missing from the meliorist framework of my fellow bloggers is the concept of Power. We’re getting progressivism when we need populism.

….Let’s recapitulate. Big finance (‘BF’) systematically dismantles regulation of its activities. BF takes taxpayer money and lobbies against the interests of taxpayers. BF shovels money to politicians. BF offers the sunny side of the revolving door to high-level officials in public agencies. BF provides a haven for its minions to make one-way/heads-I-win-tails-you-lose bets with other peoples’ money. BF alumni construct new policies, in the wake of the meltdown, to make new one-way bets, with taxpayer money. BF luminaries walk away from this debacle with personal fortunes intact, if not larger, as well as high public office, followed by further personal enrichment. Even the former chief economist of the IMF thinks that government policy has been captured by the bad guys.

I won’t pretend to have settled views about whether the financial industry owns the United States government lock stock and barrel or merely has a controlling interest.  It’s at least the latter, and after the events of the past year it wouldn’t take much to convince me of the former.  But whichever it is, I agree that irrationality just isn’t a key factor in what happened — at least, no more than it normally is for any kind of organized human activity.  At every step of the way during the Bush-era bubble, virtually everything that financial actors did was either (a) outright fraudulent or (b) cold-bloodedly rational in the short run even if it was disastrous for the rest of us in the long run.  Where are the pitchforks and torches when you need them?