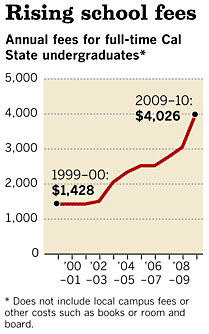 As of yesterday, fees to attend a Cal State university have gone up by a third in the past year:

As several hundred students shouted “Vote no!” outside the chamber door, California State University trustees Tuesday approved a student fee hike of 20% and agreed to furlough most faculty and staff, including college presidents, for two days each month.

….Cal State also plans to cut its 450,000 enrollment by 40,000 students over the next two years, and $183 million more in budget cuts will be borne by individual campuses.

The 23-campus university system, the nation’s largest, has almost tripled its basic fees over the last eight years, approving increases in every year but one. But Tuesday’s was by far the steepest, and followed a 10% hike approved just in May.

I know there are some pretty good arguments for having higher public university fees.  After all, why should the taxpayers subsidize kids who are just going to use their degrees to earn a lot more money over the course of their lives anyway?  And yet…..I don’t buy it.  Applied to Harvard, maybe.  But I really like the idea of having a public university system that isn’t world class (that’s what UC is for), but does provide a basic, good quality, no-frills education to anyone who wants it, and is designed to attract as many people as possible to give it a try — without having to worry that they’re racking up a huge debt if it turns out they can’t make it.  There’s not only a meritocratic ideal in this that appeals to me greatly, but it says something about the priorities of the citizenry that’s inspiring as well.

Maybe I’m living in the past.  Maybe community colleges provide that function these days.  A lot of people think so.  But I don’t.  And if I had the choice of keeping Cal State universities accessible to everyone vs. shoveling another 10,000 petty crooks into prison, I know which I’d choose.  Over the past 30 years my fellow California residents have decided they’d rather become a penal colony with a nice coastline than a land of opportunity.  It’s not a change for the better.