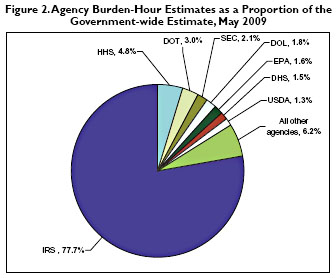 Last year, Americans spent nearly 10 billion hours [pdf] filling out more than 8,000 different government forms and other official requests for information tracked by the federal budget office. That compares with roughly one billion hours spent on similar paperwork in 1981, which in hindsight looks to have been a refreshingly uncomplicated time.

Sounds grim.  But there’s some slightly good news: according the to the linked CRS report, about 80% of all those hours are dedicated to tax forms.  Aside from taxes, all that remains is about 2 billion hours of form-filling nirvana, and I’m willing to bet that 80% of that is incurred by compliance officers and other paid professionals.  That leaves only about 400 million hours for us ordinary citizens, which works out to about two hours per year per adult.

So once you do your taxes you only have about two additional hours of government form filling out to do each year.  To be honest, that’s less than I would have guessed — but that’s probably because I’ve been fooled by the fantastic increase in private sector forms that make up the unseen superstructure of the internet age.  Here’s my guess for me personally: one hour spent filling out government forms in 2008 (an accountant does our taxes) and, oh, let’s say 10,000 hours spent filling out various annoying and idiotically designed online forms that allow me to buy things, access sites, write blog comments, take stupid quizzes, and order new services that allow me to continue living my convenient 21st century net-centric life.

OK, maybe not 10,000 hours.  But I wouldn’t be surprised if I spend 30-40 hours a year filling out various online forms for one thing or another.  How about you?