Among climate change “skeptics,” one of the favorite line of attacks is to admit that global temperatures are rising (“we’re not deniers!”) but then claim that spending money to reduce global warming is a waste.  There are plenty of more urgent problems, and we should simply deal with the effects of warming when they happen.  Well, they’re happening:

Ninety percent of Pakistan’s agricultural irrigation depends on rivers that originate in Kashmir….Traditionally, Kashmir’s waters have been naturally regulated by the glaciers in the Himalayas. 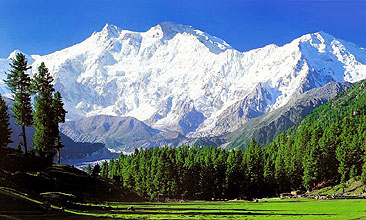 Precipitation freezes during the coldest months and then melts during the agricultural season. But if global warming continues at its current rate, the Intergovernmental Panel on Climate Change estimates, the glaciers could be mostly gone from the mountains by 2035. Water that once flowed for the planting will flush away in winter floods.

….Water is already undermining Pakistan’s stability. In recent years, recurring shortages have led to grain shortfalls. In 2008, flour became so scarce it turned into an election issue; the government deployed thousands of troops to guard its wheat stores. As the glaciers melt and the rivers dry, this issue will only become more critical.

….In 2007, the London-based NGO International Alert compiled a list of countries with a high risk of armed conflict due to climate change. They cited no fewer than 46 countries, or one in every four, including some of the world’s most gravely unstable countries, such as Somalia, Nigeria, Iran, Colombia, Bolivia, Israel, Indonesia, Bosnia, Algeria, and Peru. Already, climate change might be behind the deep drought that contributed to the conflict in the Darfur region of Sudan and hundreds of thousands of deaths.

Of course, it’s already too late to do much of anything about Kashmir’s glaciers, so I suppose that will become yet another reason for inaction.  And the aid to help Pakistan “deal” with global warming?  Somehow I have a feeling that’s not going to happen either.

Via Hilzoy, who’s hanging up her blogging spurs today back at my old home.  It’s sad news for the blogosphere, and I wish her the best of luck.  I’ll miss her.