The communists at the Wall Street Journal present us with the latest executive pay data today: 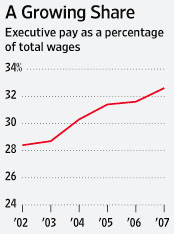 Executives and other highly compensated employees now receive more than one-third of all pay in the U.S…..In the five years ending in 2007, earnings for American workers rose 24%, half the 48% gain for the top-paid. The result: The top-paid represent 33% of the total, up from 28% in 2002.

….The data suggest that the payroll tax ceiling hasn’t kept up with the growth in executive pay. As executive pay has increased, the percentage of wages subject to payroll taxes has shrunk, to 83% from 90% in 1982. Compensation that isn’t subject to the portion of payroll tax that funds old-age benefits now represents foregone revenue of $115 billion a year.

You probably thought that the big problem with skyrocketing executive pay was the fact that it left nothing for the rest of us.  And you’re right: that 24% increase for “American workers” includes the 48% increase for the top earners.  In other words, the executives got a 48% increase, the rest of us got approximately nothing, and it all averaged out to 24%.

But that’s not all!  It also means that the average joes with stagnant wages couldn’t keep up, so they went deeper and deeper in debt.  And who loaned them the money to do that?  Well, the rich can’t really spend that ocean of extra dough they’re getting — the technical reason is that they have a lower marginal propensity to consume than average joes; the nontechnical interpretation is that you can only buy just so many yachts — so they ended up loaning most of it back to the middle class.  We all know how that turned out — but the rich got bailed out by the taxpayers so they ended up OK.  The rest of us, not so much.

And now the Journal is pointing out yet another problem with running our economy solely for the benefit of the wealthy: you only owe payroll taxes on income up to $106,000.  This number rises every year, but it doesn’t rise nearly as fast as the earnings of the rich.  Which means that more and more income every year is above the cutoff and doesn’t get taxed.  And that in turn means that Social Security is in considerably worse shape than it would be if increases in national income weren’t being hoovered up almost exclusively by the executive class.

So there you have it.  If we don’t pass healthcare reform it will be because the rich don’t want to help pay for it.  Average wages are stagnant because that leaves a bigger pool of money for the rich to slosh around in.  We’re letting the planet fry because policies to stop it would inconvenience the rich.  Regulatory reform of the financial system increasingly appears to be a dead letter because Congress is owned by the rich and they don’t want it.  Against all that, I suppose that crippling Social Security hardly even shows up in the ledger.  But we might as well tot it up anyway.