Maybe you know this, maybe you don’t, but generally speaking you can’t sue your credit card company if you have a dispute with them.  The fine print in your contract says that all disputes have to be resolved by an arbitrator.  And not just any arbitrator: it has to be one chosen by the credit card company.  Probably one with a record of siding against the consumer 99.8% of the time.

But those days may be ending thanks to Lori Swanson, 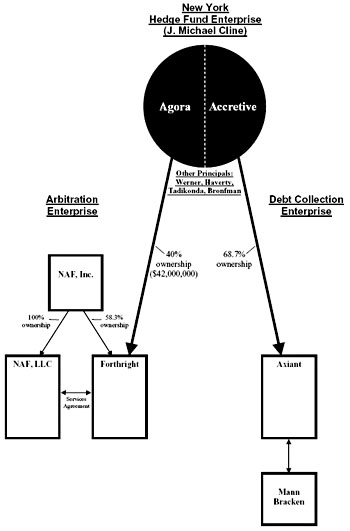 the attorney general of Minnesota.  She sued one of the two biggest arbitration outfits in the country last week and they caved almost immediately.  Within days they announced they’d no longer be taking new cases.

So what was Swanson’s complaint?  Simple: it turns out the National Arbitration Forum had affiliated itself with a debt collection conglomerate, something that might have made them just a wee bit less than perfectly neutral in consumer debt disputes.  The affiliation was done through a chain of intermediaries to try and keep everything on the QT, but it was still there.  The chart on the right shows how it worked.  Here’s the explanation from the court filing:

Accretive, Agora, Axiant, the Forum, and Mann Bracken form a complex web of companies that compose some of the largest debt collectors and arbitrators of consumer credit card debt in the country.

….In June 2006, principals of Accretive, LLC met in Minnesota with Edward Anderson and Michael Kelly, officers of the National Arbitration Forum….Among other things, Accretive promised the Forum that it could provide it with “[i]ntroduction to legal collections individuals” and stated that “we believe Accretive would be a great partner to help NAF become a billion dollar company.”

….Under the proposal, Cline’s company — Accretive, LLC — would acquire a 40 percent ownership interest in the Forum and the right to appoint two members to its board of directors. Accretive promised to play an “active role in landing new customers.”

….The Forum — aided by principals of Accretive — thereafter went to great lengths to concoct an elaborate corporate structure that conceals — but does not legitimize — the affiliations that undermine its claims of independence and neutrality. For example, for most of its existence, defendant NAF, Inc. operated as a standalone company. As part of the transaction between the Forum and Accretive, both companies created new companies that would conceal the affiliation between them. The Forum formed Forthright, and Accretive formed Agora. As a result, at no time is Accretive publicly disclosed as an owner of the Forum….In fact, the three defendants — NAF, Inc., NAF, LLC, and Forthright — effectively operate as one enterprise.

Italics mine.  Basically, a guy named J. Michael Cline, who owned a bunch of debt collection companies, put together a plan to secretly buy a stake in NAF.  Result: synergy!  NAF rules against the consumer and one of Cline’s companies collects the debt.

There’s plenty more like that if you plow through the rest of the complaint.  And needless to say, NAF claims that nothing shady was going on at all: their rulings would have continued to be completely fair and neutral regardless of who their partners were.  You can decide for yourself if you believe them.

UPDATE: There are two big arbitration outfits, NAF and the American Arbitration Association, and both have stopped taking new cases.  However, Swanson’s office didn’t sue AAA.  They only sued NAF.  The post has been corrected to reflect this.