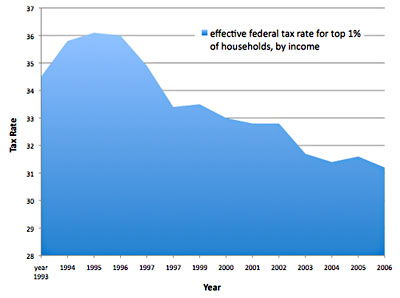 Via Conor Clarke, this chart shows the effective federal tax rate paid by the rich over the past 15 years.  The basic story is simple: As their incomes have gotten ever higher, their tax rates have gotten ever lower.  So if tax rates on the rich are raised to help pay for healthcare reform, as some Democrats are proposing, it would just return us to the rates of the early 90s, not some hellish confiscatory dystopia.  Bruce Bartlett says that if this happens, Republicans have only themselves to blame:

For many years, I have urged conservatives to think about ways of raising new net revenue for the government. My fear has always been that sooner or later, pressure to raise taxes will become overwhelming. If there wasn’t a conservative option available, then the default policy would be to sharply raise tax rates on the wealthy. Now it looks as if that day has arrived.

….In the end, higher tax rates on the rich are inevitable if only because of expiration of the Bush tax cuts next year. Since that would just return rates to where they were in the 1990s when growth was robust, any claim that this will destroy the economy should be taken with many grains of salt.

Still, it would be better to pay for health reform some other way. But if Republicans refuse to propose any alternative, insisting instead that taxes should never be raised for any reason, they pretty much guarantee that Democrats will raise the top rate. If that happens, Republicans will bear some responsibility as well.

Yep.  If I were designing a system from scratch I’d probably finance it differently too.  But Republicans have been so successful at demonizing taxes over the years that there aren’t very many practical alternatives open any more.  Returning top marginal rates to the level they were at in the 90s is one of the few left.